Epic Rover is a mobile app from Epic Systems that allows clinicians to record documentation and conduct barcode validation at the point of care, typically the patient bedside.

Available for iOS, Android and other mobile platforms, Rover connects in real time to Epic’s central data repository, providing access to other information held in the Epic system, like patient lists and charts. To open a patient’s chart from a patient list using Rover, an individual would simply tap the patient’s name or use the device scanner to scan the patient’s wristband. 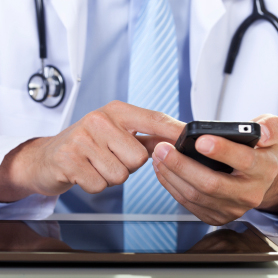 According to the Epic Product Catalog, Rover displays relevant medication advisories at the point of care, supports recording of vitals, and provides a clinical summary of allergies, labs, current medications, and intake/ output. Clinicians can also update administration details such as dose, route, or site.

A Care Team report can be viewed in Rover to find and contact other clinicians involved with a patient’s care.

Large Epic customers using Rover include the Cleveland Clinic, Ochsner, University of Colorado Health, and Texas Children’s, which implemented Rover toward the end of 2015.

“Medication scanning creates a significantly safer process and improves compliance with industry standards and regulations,” said Texas Children’s Clinical Informatics Director Jennifer Sanders. “It’s a safety measure for our patients and provides an additional safety net for our frontline nurses and clinical staff who are the last line of defense to prevent medication errors.”

Rover is already having a positive impact at Texas Children’s, according to nurse, Shiba Ninan. In June 2016, Ninan reported that Rover helped her head off a potential medication error after she scanned her patient’s wristband.

“Rover was telling me that this was the wrong medication for my patient! The medication given to me was methylprednisolone. The label had the correct last name of my patient but the first name was different and the dose was much higher. This medication belonged to a patient in the next room. Thanks to the technology now in place at Texas Children’s, this potential error was avoided.”

Clinicians can download Rover from the major app stores, iTunes (iOS) and Google Play (Android), but its usage requires licensure from Epic. The specific features available to end users can vary depending on the deployment decisions made by the organization licensing the app.

A related app, Revor, allows project team members and system administrators of organizations using Epic Rover to preview upcoming development before it is released to clinicians.