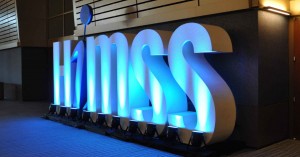 With HIMSS 2016 right around the corner (Feb. 29 – March 4 in Las Vegas, NV), the health IT world is placing its bets on what the hot industry topics will be at the annual conference.

On the state of health IT:

25 things to know about the state of health IT https://t.co/IWhcNuzAHe via sharethis

I hesitate to make business files accessible over the open internet with just a login/password. Two factor authentication is peace of mind.

On health IT innovation:

This incredible bracelet projects a working #touchscreen onto your skin #WearableTech #wearables https://t.co/jXl39nocFf via techinsider

How to build a healthcare organization ready to innovate. @HealthAVIA @HIMSS @HX360_ pic.twitter.com/53uf4VKsEB

Have you used the IFTTT app? It connects apps together. Imagine connections to health info. IF pollen count high SEND "Don't forget inhaler"

Promise of EMR is great. If we can focus on better use versus more MU functions, the promise of better care and lower cost can be achieved.

My Fitbit response to an Epic go-live: http://t.co/lsF5SnWcgU.

Keeping Your Equanimity in 2016: 2016 is a year when CIOs will feel even more overwhelmed than last year... https://t.co/djUKvFdn0r

"Creating a Legacy by Harnessing the Power of Women in IT" by @conciergeleader on @LinkedIn https://t.co/ZuS2L0XhaI

When you consider 2016 and your goals, can you clearly share them all in 1 sentence? You should be able to! https://t.co/kWUcBjzxRS

The Ultimate Guide to HIMSS19 For New and Seasoned Attendees

Calling all champions of healthcare, it’s almost time to gather amongst 45,000+ health professionals at HIMSS19! This year’s conference is happening in Orlando, FL at the Orange County Convention Center. HIMSS is bringing more to the table than ever before and the week’s agenda will focus on a combination of recurring and new global healthcare […]