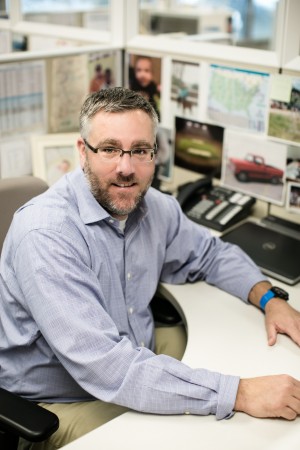 Consultant Advisor Andy Bryant loves his day job recruiting for Healthcare IT Leaders, but if he wasn’t working here, he would be working as a missionary around the world. He’s been involved with global missions with his Alpharetta church since 2005, traveling to Mexico three times, Haiti twice, the Dominican Rublic, Cambodia and Kenya. Andy, an Auburn University graduate, has led teams of five to more than 30, building churches, orphanages and schools in the places he’s traveled. When Andy’s not helping others, he’s reading everything he can about cars, watching football and spending time with his family.

Q: How did you get here (to Healthcare IT Leaders)?
A: I started working for Bob Bailey (founder of Healthcare IT Leaders) in 1999. As he has moved on and started different companies, I have generally followed. We worked together most recently at his company, B2B Workforce, and now we're working together here.

Q: What is your favorite HIT Leaders company memory?
A: Having the familiar feeling of being able to start a new company again like we did at our previous company.

Q: Who would you most like to meet, in history or current?
A: Jesus

Q: What’s your favorite thing to do outside of work?
A: Hang out with my wife and son.

Q: What was your favorite TV show when you were little?
A: Dukes of Hazzard.

Q: What’s your favorite food or favorite kind of food?
A: Mexican

Q: If you could be an animal what animal would you be and why?
A: An American Bald Eagle. They’re beautiful animals, and I love what they represent.

Q: Least favorite animal and why?
A: Snakes. They creep me out. I’ve just never liked them.

Q: What would you do or buy if you won the lottery?
A: I would immediately give at least 50 percent to charity.

Q: What’s your favorite thing about recruiting?
A: Having conversations with people.

Q: If your life was a movie, who would play you?
A: Chevy Chase. I liken myself to the character he played in the National Lampoon movie series, Clark W. Griswold. He’s a family man, a working father, and just about everything he gets involved in turns into a near-disaster, but everything works out in the end.

Q: What about you would surprise your coworkers?
A: My desire to pursue mission trips around the world.

10 Strategies to Help You Stop Procrastinating

When faced with a long list of competing priorities at work is your first instinct to check your Facebook feed or head out to lunch? Yup, you are a procrastinator. Almost all of us procrastinate sometimes—putting off a difficult task by substituting another activity that may be more enjoyable or distracting. But a reported 20 […]