Certified Epic Ambulatory consultants are in highest demand in today’s hospital IT job market, according to Healthcare IT Leaders. Our analysis of client job requests since 2012 shows one out of every 10 jobs posted to our website is an Epic Ambulatory job.

The next five most requested roles are also typically part of a large-scale Epic project. These include:  Epic Resolute, Epic Willow, Epic Orders, Epic OpTime and Epic Cadence. 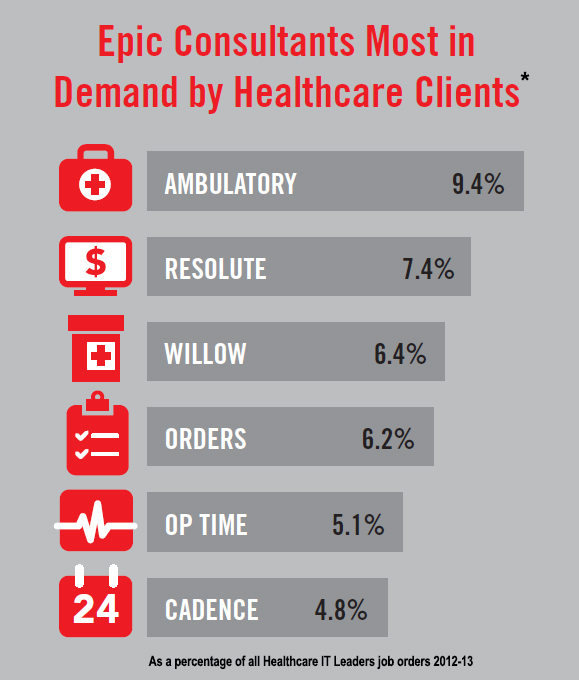 The hottest skills required for any of these Epic software modules are those of an analyst. Since 2012, nearly a third of all jobs posted have been for analysts. Other common skillsets typical to an Epic engagement include project managers, developers and trainers.

Epic certification is fast becoming the prerequisite for Epic consulting engagements.  Nearly 90 percent of our Epic jobs require Epic-certified consultants. Of jobs that don’t require certification, most are for trainers. For training roles, credentialing is strongly preferred.

Healthcare IT Leaders principal Brad Elster recently shared our observations on the Epic job market during a webinar co-sponsored with Towers Watson titled “Help Wanted:  Solutions for the HIT Hiring Crisis.” Experts from Towers said base salaries for Epic analysts and Epic project managers are rising faster than those of other healthcare IT workers.

Such pay bumps are indicative of a "white hot" market for Epic certified talent, said Elster. He estimated that as many as 15 Epic jobs may exist for every one Epic certified IT professional. This disparity is slowing some EMR projects and putting hospital IT initiatives at risk.

To compete for talent and keep Epic projects on track, Elster recommended that hospitals pursue multiple hiring and sourcing strategies.

This multisource approach, he said, should include internal re-training and recruitment as well as budget for outside consultants from software vendors, system integrators and staff augmentation firms.

Legacy systems are a challenge for all companies, especially those who grow through acquisition or need to focus on immediate profitability after a merger. Modernizing and consolidating systems is often left out of acquisition timelines. Unfortunately, this often leaves IT with a patchwork of legacy systems to manage and a lack of partnership between IT […]

One of the biggest challenges for health systems as their workforces return to the hospital and practice setting – whether it’s due to the end of self-quarantine or the easing of a work-at-home policy – is minimizing the number of shared touchpoints that employees have. Organizations are trying to do everything they can to reduce […]

COVID-19 treatment scenarios are accelerating adoption of technologies that connect providers, patients and caregivers virtually without requiring physical office visits. One company well positioned to take advantage of this trend is NJ-based medtech startup, Noteworth. The Noteworth platform is designed to remove the barriers to tech enabled care, using intuitive workflows for clinicians and a […]