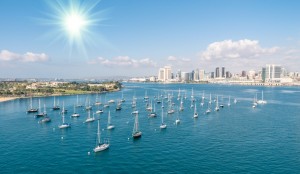 It’s no secret that San Diego has great weather, but with our hiring for dozens of Epic jobs in San Diego, the career outlook in San Diego is sunny as well.

The city has been named to the list of 10 Best Weather Cities from the Farmer’s Almanac and the Best Climate for Summer Weather by The Weather Channel, but why is it always so sunny in San Diego?

For starters, San Diego is located between 30 and 45 degrees latitude, the same distance from the equator as southern Italy, Greece, Portugal and Spain, which gives all these places a Mediterranean climate.

Besides its Mediterranean climate, here are five other ways San Diego weather differs from the rest of the nation:

Wish you were here? Check out our full list of Epic jobs in San Diego, and you might be headed west to the land of blue skies and sunshine in no time.

Epic UGM is back in-person for 2021! The conference begins on Monday, August 23rd, and concludes on Wednesday, August 25th. Similar to pre-COVID years, the conference is taking place in Verona, Wisconsin at Epic’s campus; however, this year there is a full-vaccination requirement to attend. Streaming options will be available for the Executive Address. Epic […]

5 Ways To Actually Disconnect While On Vacation (Infographic)

In this tech-obsessed world, you’re always glued to at least one of your electronic devices. You’re constantly notified of an email, text, call, meeting—the list goes on. Even some fitness trackers now let you know when you’re receiving a phone call. While it’s imperative to stay in the loop during the workweek, you deserve some […]