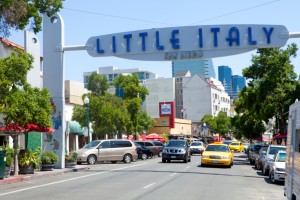 As the eighth-largest city in the United States, San Diego is a hub for culture, business and finance. It’s the kind of place professionals are drawn to, as it has great weather, pristine beaches and great neighborhoods to call home.

If you’re interested in living and working in San Diego, you’re in luck – not only are we hiring there for a multi-year Epic implementation at one of the country's top employers, but we also have the skinny on the top five neighborhoods for professionals in the city. Whether you’re looking for a quiet place to live, a walkable, friendly neighborhood or an active, vibrant nightlife, you’ll find what you’re looking for in the descriptions of the five San Diego neighborhoods for professionals below.

Gaslamp Quarter
If you’re up for more nightlife, the bustling Gaslamp Quarter neighborhood is just a short walk from Little Italy. Home to multiple festivals, such as Mardi Gras in the Gaslamp, Street Scene Music Festival and ShamROCK, a St. Patrick’s Day block party, the Gaslamp Quarter may surprise you with its strikingly beautiful historic architecture and buildings, such as the U.S. Grant Hotel. In fact, the neighborhood is listed as a historic district on the National Register of Historic Places, tracing its roots back to 1867. With lounges and bars with names like Prohibition, Pop’s Liquor Cabinet and the Cat Eye Club, you can have an old-fashioned cocktail in a neighborhood with a modern flair.

Point Loma
Meaning “point on the hill,” Point Loma is a seaside neighborhood with a great view of the Pacific Ocean, the San Diego Bay and the San Diego River. Needless to say, an emphasis on the water’s value to the area is key here, as seafood restaurants, Point Loma Tide Pools and Old Point Loma Lighthouse can’t be missed. On land, visit the Sunset Cliffs National Park, a public shoreline park, and the nine-hole golf course at Liberty Station, a waterfront park. There are few rainy days in San Diego, but just in case your children need something to do indoors, the James Edgar and Jean Jessop Hervey Public Library’s children’s library is the largest in the city and features a simulated ship, surfboard-shaped desks, an art area and more.

Mission Hills
One of San Diego’s oldest neighborhoods, Mission Hills features historic, expertly restored architecture and a variety of classic home styles, including Craftsman bungalows, Prairie homes and Spanish and Mission Revival. Mission Hills residents love to walk through the area’s tree-lined streets, abundant greenery and gardens (thanks in part to Mission Hills Nursery, which opened in 1910), to the nearby fine dining restaurants, businesses, shops and markets, including the local Vons and Albertsons, two grocery stores that will remind you of a more personable, neighborly period of time.

South Park
If you’re looking for a walkable neighborhood with an emphasis on local culture, South Park may be where you want to live in San Diego. With unique events such as the annual Old House Fair, when local businesses sell home furnishings and accessories for owners of vintage homes, and the quarterly, dog-friendly Walkabouts, in which the South Park shops and restaurants keep their doors open late, providing live music and refreshments for locals, you’ll get to meet your South Park neighbors in their element. Plenty of taverns, wine bars, restaurants and coffee houses will keep you nourished, though you may want to pay extra attention to 30th Street, which Men’s Journal called “The Nation’s Best Beer Boulevard.”

If you’re a traveling consultant, you’re already aware that time management is vital when you’re on the road week after week. Along with meeting deadlines and staying productive, traveling consultants have to factor in other obstacles—such as getting enough sleep, flight delays, or navigating an unfamiliar city. Our team of travel experts shared 6 strategies […]

It’s Epic’s 40th birthday this year, and they’re celebrating with another exciting year of Epic UGM. The conference begins on Monday, August 26th, and concludes on Thursday, August 29th. Just like previous years, the conference is taking place in Verona, Wisconsin at Epic’s campus.  Epic is hosting the event, and executives, directors, clinical staff, and […]