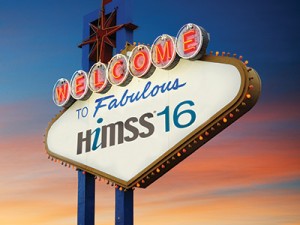 In case you missed it, the 2016 HIMSS Conference and Exhibition was Feb. 29 – March 4 in Las Vegas, where 41,885 health IT professionals and enthusiasts descended on the Venetian, Palazzo and Sands Expo Center to hear industry leaders speak on the past, present and future of health IT.

In between, CIOs, physicians, healthcare leaders and health IT journalists, social media ambassadors and consultants provided the foundation for the year 2016 with words that inspired and intrigued. We gathered the 9 best HIT quotes from HIMSS16 and listed them below.

On change:
"If we can show people rather than tell them, ideas will catch on." – University of Pennsylvania professor and bestselling author Dr. Jonah Berger

On interoperability:
"On the supply side, we have built up an amazing amount of health information. We have to set it free." – National Coordinator Karen DeSalvo, MD

“To drive innovation you have to take certain risks. Don’t wait until you’re forced to change.” – Founder and CEO of Dell Inc. Michael Dell

“It's unethical and immoral to withhold information. If you're not interoperable in the next five years, you'll be obsolete.” – Cerner President Zane Burke

On the gender pay gap in health IT:
“I don’t know about you, but I find those [to be] rather startling findings. We wanted to present these findings as a way to begin the conversation. I firmly believe that sunlight is the best disinfectant.” Executive Vice President of HIMSS Carla Smith

On health IT from a CIO’s perspective:
"As a CIO, I believe we need to live where our clinicians live and see what they see."  - Cleveland Clinic CIO C. Martin Harris, MD

On simplicity in health IT:
"If you can't explain something simply, you don't understand it well enough." - Albert Einstein, via University of Pennsylvania professor and bestselling author Dr. Jonah Berger

On what health IT professionals do every day:
“Football is a game. Revolutionizing healthcare is a mighty endeavor. I can’t even come close to doing what you do.” – Super Bowl 50-winning Denver Broncos quarterback Peyton Manning

Want to speak at next year’s HIMSS conference? The 2017 HIMSS Conference and Exhibition is scheduled for Feb. 19-23, 2017 in Orlando, Fla., and will begin accepting proposals May 2.