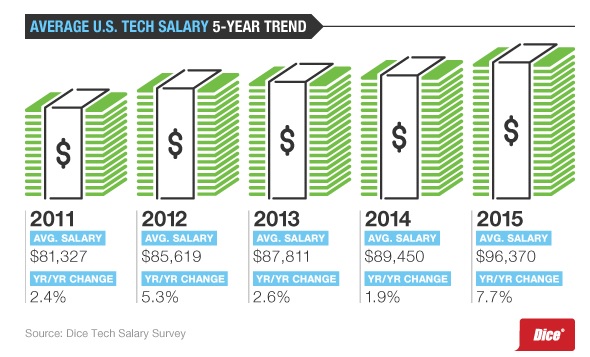 Average salaries, bonuses and contract rates for technology professionals in the U.S. rose year-over-year, according to the annual Dice Salary Survey.

“It’s a good time to be in technology and to be an IT contractor,” said Healthcare IT Leaders President Brad Elster. “As the demand for IT contractors to help health systems replace or upgrade their EMRs continues to grow, the compensation for health IT jobs should increase as well.”

More experienced technology professionals were more likely to receive a bonus, as well as those in the banking/financial, telecom, hardware, entertainment/media and utilities industries. Average salary increases were greatest among entry-level technology workers (with one to two years’ experience), suggesting there is wage pressure for entry-level technology jobs, and employers are willing to pay for new talent.

“The competition for tech talent today is undeniable,” said Bob Melk, President of Dice. “Demand for skilled talent and low unemployment rates for tech professionals aren’t making the hiring landscape any easier. Employers realize offering competitive pay is a necessity. What’s promising is the tech industry recognizes the need to fill open seats as well as to reward tech talent for their hard work.”

Reasons for salary increases were*:

Technology professionals are becoming more satisfied with their pay at 53% noting satisfaction, up from 52% last year. Plus tech professionals’ confidence in job prospects remained high, with 67% claiming they could find a favorable new position.

*Percentages total more than 100% due to rounding.

How to Complete an EHR System Selection

There's more to EHR system selection thank you might think. Electronic Health Records (EHRs) have become vital to modern healthcare delivery. They improve the efficiency and accuracy of patient care and provide reduced costs, enhanced patient safety, improved quality of care, and streamlined workflows. However, selecting the right EHR system for your organization can be […]

Most folks own an old, beloved pair of shoes. Looking past the worn soles and tearing seams, we hold onto these relics because we can’t bear throwing them out (so much history!) and the initial discomfort of breaking in new footwear (not to mention the upfront price). Holding onto outdated and underperforming human capital management […]

Is Healthcare IT Meaningful Work?

Most would agree that doctors and nurses, i.e., those on the front lines of delivering patient care, have meaningful jobs. But what about those behind the scenes, such as the healthcare IT workforce that installs the electronic medical records systems (EMRs), maintains billing and coding software and manages the overall IT infrastructure of hospitals and health […]