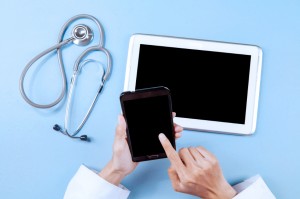 Even though only 26% of physicians access their EHR from a tablet or mobile device, those users are more satisfied with their EHR system, according to the new EHR UserView Survey from Software Advice. The survey polled nearly 600 physician users about their current EHR systems’ key benefits and challenges and their future healthcare IT investment plans.

Fifty-eight percent of users who accessed their EHR from a mobile device were “very satisfied” with their EHR, compared to 28% of non-mobile users.

Mobile users may be more satisfied with their systems because they were less affected by common EHR challenges in learning to use the system. Thirty-nine percent of mobile users expressed that learning how to use their EHR system was challenging, compared to 58% of non-mobile users. The report said that this discrepancy may be because mobile users take their mobile devices home and learn to use the EHR system outside of normal working hours.

Plus, physicians embrace using smartphones, as 47% of physicians already use mobile devices for clinical purposes, and most physicians (89%) use smartphones to communicate with hospital staff. A 2013 Black Book Rankings survey found that 83% of doctors would use mobile EHR apps to update charts, check labs and order medications if their current EHR vendor made those features available for mobile.

When asked what EHR modules and applications physicians planned to invest in more heavily in the future, EHR UserView Survey respondents said they were most interested in increasing their investment in patient portals (36%), followed by e-prescribing, health information exchange and lab integration.