The need for ICD-10 coding experts may increase by as much as 40 percent over the next two years, according to a new report. The "State of H.I.M." survey of over 300 health information management professionals says coder demand will reach its peak between the third quarter of 2013 and first quarter of 2014, as the October 2014 federal implementation deadline for ICD-10 approaches. 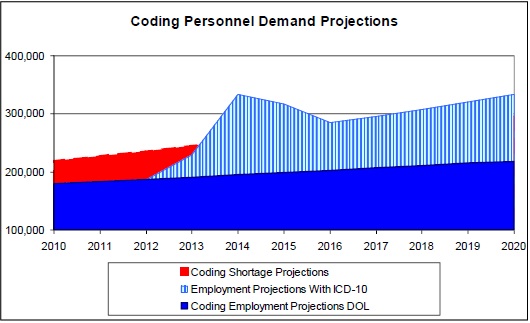 The HIM professionals cited in the report were surveyed late in 2012. At that time, only 19 percent reported having a project plan underway for the ICD-10 transition, while 25 percent said they had not yet  formed a steering committee to tackle the challenge.

Outsourced labor for ICD-10 jobs is expected to grow from 9 percent of the labor market to more than 33 percent. The report noted that direct hiring might prove insufficient to meet demand.

"As more facilities get a better handle on what their coding needs may be," wrote the authors, "the spike in demand over 2014 and 2015 may increase by as much as another 30 percent to 40 percent. The situation may look daunting to a market already feeling the strain of a coder shortage."