Electronic Health Records have been implemented in over 95 percent of hospitals, according to the Office of the National Coordinator of Health IT. But analysis from KPMG finds healthcare organizations are still figuring out how to execute post-implementation strategies that effectively transform data analytics into valuable business outcomes and improve patient outcomes.

“[Most] EHRs – which represent thousands of resource hours and millions of dollars spent for many healthcare organizations – were implemented as one-time, factory boilerplate-style system installations,” writes Ralph Fargnoll, KPMG’s Advisory Managing Director. “With the need to realize the value of healthcare IT investments becoming apparent, healthcare leaders now acknowledge that information systems must be implemented as part of more strategic, long-term initiatives,” he states.

Over the next 3 years, 38 percent of CIOs plan to implement additional Electronic Medical Record (EMR) features and focus on system optimization, according to a survey conducted by KPMG and the College of Healthcare Management Executives (CHIME). 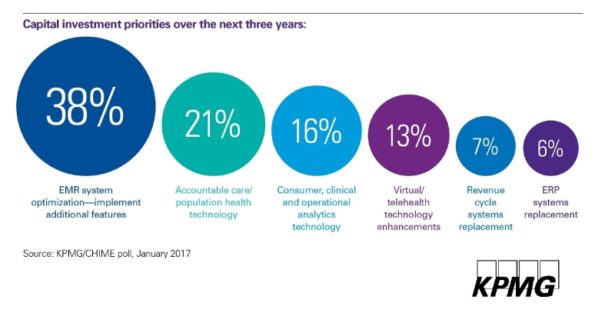 A new survey from Philips and HIMSS Analytics of healthcare C-suite and IT directors, also confirms the growth of population health spending.

The Urgency of Interoperability

The word “interoperability” means different things to different people. By definition in the IT world it is the ability of computer systems or software to exchange and make use of information. While most healthcare providers want and understand the importance of EHR interoperability, most also say (according to this 2017 survey) that current interoperability solutions […]