Record-breaking EHR adoption is fueling unprecedented growth in health IT, but hospitals are also putting the brakes on some IT initiatives because of staff shortages, according to two reports released this week.

In 2012, some 44 percent of hospitals reported having a basic electronic health record system, up 17 percentage points from 2011, according to a Robert Wood Johnson Foundation study, co-authored by Mathematica Policy Research and the Harvard School of Public Health. The study said 40 percent of office-based physicians had adopted electronic records as of 2012.

The proportion of rural hospitals using an EHR increased from 9.8 percent to 33.5 percent from 2010-12; during the same period, urban hospitals saw their EHR adoption rates rise from 17 percent to 47.7 percent. The report also found that 27 percent of hospitals are participating in health information exchange initiatives – up from 14 percent in 2010.

Not surprisingly, the report, titled “Health Information Technology in the United States: Better Information Systems for Better Care, 2013,” finds that federal incentives are the primary catalyst for growth. “The timing of this sharp increase in the rate of adoption by hospitals at the beginning of the EHR Incentive Program payments suggests that the HITECH Incentive Programs are spurring hospital adoption of more comprehensive EHR systems,” said the authors.

Technology Growth Spurs Staffing
All of this growth is a boon for IT hiring as reported in the inaugural 2013 HIMSS Workforce Survey. The survey of hospital IT and hiring executives found that 85 percent of respondents had hired at least one new full-time employee (FTE) over the past year, while only 13 percent had laid off any staff in the same time frame. 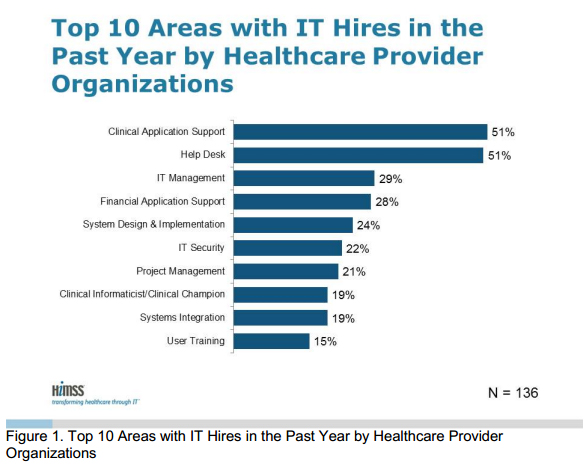 But some healthcare executives said FTE hiring was not always sufficient to keep pace with demand for IT initiatives. Thirty one (31) percent reported placing at least one IT initiative on hold due to a lack of IT staffing and 19 percent reported that they had not yet placed any IT initiatives on hold but were considering doing so. Projects most likely to be delayed included new system installations, EMR integrations and system/hardware upgrades and enhancements, the report said.

Our Take
The hiring needs and challenges of healthcare systems and hospitals will persist through the end of the decade, necessitating use of consultants and trusted partnerships with experienced staff augmentation firms, such as Healthcare IT Leaders. The HIMSS survey confirms the need for outsourced staffing. Approximately three-quarters of respondents (76 percent) indicated that their organization had outsourced some of their staffing needs to a vendor or consultant instead of hiring someone to handle that task.