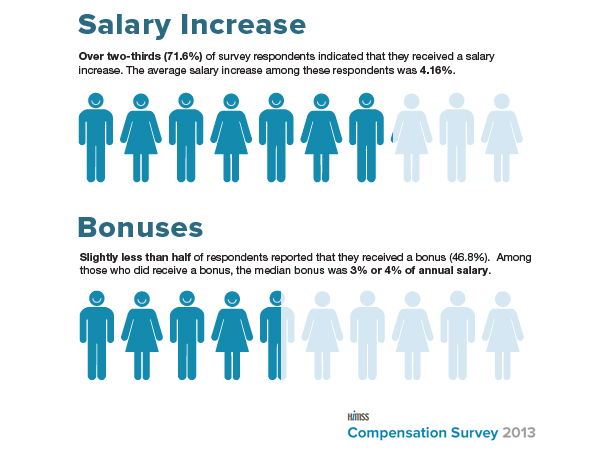 Salary-wise, 2013 was a good year to be a HIT professional.

Over two-thirds of respondents to an annual compensation survey of healthcare IT workers said their pay increased last year by an average of 4.16%.

The survey, conducted by the Healthcare Information and Management Systems Society (HIMSS), targeted the organization’s entire membership. A total of 1,160 responses were received.

The average salary of a HIT professional, according to HIMSS is $113,269. Variables that can affect average annual pay include experience and seniority, skillset, region and the size and type of employer.

On average, those working for a for-profit/private organization received the highest raise, in terms of percent of their salary — 4.79%, while those working for the government reported receiving the lowest salary increase — 2.22%.

IT workers at small ambulatory facilities (with 10 or less physicians) scored the lowest average salary ­— $79,482 — but got the biggest raise last year, averaging 7.98%.

Bonuses also increased total compensation for nearly half of those surveyed, with 46.8% reported receiving a bonus.

With healthcare job growth projected to remain strong and HIT professionals in high demand, 2014 is a good time to consider a job change, according to Carter Torrey, a talent acquisition advisor with Healthcare IT Leaders. If you are in the market for a new full-time or contract role in the New Year, simply submit a resume for immediate consideration.

What is Advanced Scheduling? Q & A with Dave Johnson

Labor shortages and cost pressures make it more critical than ever for healthcare organizations to "get the schedule right." So we asked our UKG Practice Leader Dave Johnson to tell us more about the role of Advanced Scheduling as part of a larger Workforce Management (WFM) solution. Why is scheduling such a critical component of […]

Vaccine and Testing Directives: What’s Next After the SCOTUS Rulings?

While many employers are breathing a sigh of relief now that the U.S. Supreme Court has blocked OSHA’s vaccinate-or-test mandate, the difficult and daily challenge of managing COVID-19 risks in the workplace doesn’t go away. COVID-related absenteeism is on the rise, return-to-work plans are on hold, and Omicron-fueled outbreaks continue to cause short-term worksite closures […]